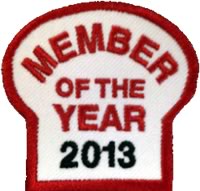 Starting in 2013, our President at that time, Rick McDonnell, started a new tradition of having a Gear Grinder Of The Year. In addition to the honor of being chosen as the GG of the Year, the members receives a patch for their jacket and a $100 Gift Card.

That first year Rick chose the member that he felt most deserved the award. That member was Charles Fennen, for all the work that he did on our posters and shirts for the Nostalgia Car Show and first Classy Chassis Show.

The following year it was decided that the club would nominate members and they would be voted on at our December meeting. The members winning the vote in 2014 was Doug Seiler, for all the work he's done being Sgt. of Arms and keeping track of all our supplies, ordering the food and picking it up for our different parties and events and being the coffee guru for the State Rod Run, even though he doesn't drink coffee.